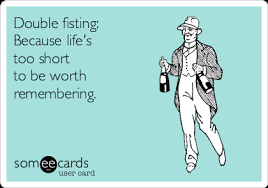 We wrap up with a discussion from the Talmud, Pesachim 109-110, about drinking the four cups of wine at Passover and the dangers related to drinking (or doing anything) in even amounts.

While our ancestors’ beliefs about demons (and witches, I couldn’t resist including that one), the lesson for us comes from how the rabbis explain the drinking of the four cups.  Their interpretations of the four cups’ meanings can apply to our sedarim now.

Pesachim 109b:  We learned in the mishnah that even regarding the poorest of Jews, the charity distributors should not give him less than four cups of wine.

The Gemara asks: How could the Sages establish a matter through which one will come to expose himself to danger [from demons, who attack you when you do things in pairs]?  Wasn’t it taught in a baraita: A person should not eat pairs, i.e., an even number of food items; and he should not drink pairs of cups; and he should not wipe himself with pairs; etc.?

Looking ahead a page in the Talmud, we learn more about demons and “evens.”

Rav Yosef said: Yosef the Demon said to me: Ashmedai, the king of the demons, is appointed over all who perform actions in pairs.  Can you call a king a harmful spirit?  Would he cause harm?  Rather, some say this statement in this manner: On the contrary, he is an angry king who does what he wants, as the halakha is that a king may breach the fence of an individual in order to form a path for himself, and none may protest his action. Similarly, the king of demons has full license to harm people who perform actions in pairs.

Rav Pappa said: Yosef the Demon said to me: If one drinks two cups, we demons kill him; if he drinks four, we do not kill him. But this person who drank four, we harm him. There is another difference between two and four: Regarding one who drinks two, whether he did so unwittingly or intentionally, we harm him. About one who drinks four, if he does so intentionally, yes, he is harmed; if he does so unwittingly, no, he will not be harmed.

The Gemara asks: And if one forgets and it happens that he goes outside after having drunk an even number of cups, what is his solution? The Gemara answers: He should take his right thumb in his left hand, and his left thumb in his right hand, and say as follows: You, my thumbs, and I are three, which is not a pair. And if he hears a voice that says: You and I are four, which makes a pair, he should say to it: You and I are five. And if he hears it say: You and I are six, he should say to it: You and I are seven. The Gemara relates that there was an incident in which someone kept counting after the demon until he reached a hundred and one, and the demon burst in anger.

Ameimar said: The chief of witches said to me: One who encounters witches should say this incantation: May hot feces and dates be in your mouth, witch, and may your hairs fall out, and may your crumbs be scattered to the wind.

Now that we’ve seen the dangers one might encounter from demons when doing things in pairs or in even combinations, let us consider how this applies to our four cups of wine on Passover – seeing as four is a dangerous number of cups to drink, what do the rabbis say we should do?

Rav Naḥman said the verse: “It was a night of watching to the Lord” (Exodus 12:42), which indicates that Passover night is a night that remains guarded from demons and harmful spirits of all kinds. Therefore, there is no cause for concern about this form of danger on this night.   אָמַר רַב נַחְמָן, אָמַר קְרָא: ״לֵיל שִׁמּוּרִים״ — לַיִל הַמְשׁוּמָּר וּבָא מִן הַמַּזִּיקִין

Rava said a different answer: The cup of blessing for Grace after Meals on Passover night is used in the performance of an additional mitzvah and is not simply an expression of freedom. Therefore, it combines with the other cups for the good, i.e., to fulfill the mitzvah to drink four cups, and it does not combine for the bad [blessing a cup of wine as part of grace after meals is an “extra” mitzvah that when joined to the others for Passover makes a “good” set of four].

[And/or] About the danger of drinking pairs of cups, it is as though one drinks only three cups. [Rava adds another thought which could be another interpretation on its own, namely that the third cup drunk as part of Grace after Meals, only occurs since you’re eating anyway, so it is like an “extension” and so it doesn’t count as a totally separate cup.]

Ravina said: The Sages instituted four separate cups, each of which is consumed in a manner that demonstrates freedom. Therefore, each one (110a) is a distinct mitzvah in its own right. In other words, each cup is treated separately, and one is not considered to be drinking in pairs.

Think about the four positions presented by the three rabbis here.  Is there one that speaks to you about the meaning of your seder?  Is Passover mainly about the miracle of the Exodus as Rav Nahman suggests?  Does Passover augment and enhance our regular Jewish observances and practices as Rava seems to be saying?  Or is there something to Ravina’s view that each cup, like each mitzvah we do at any time, has its own meaning and deserves its own attention?