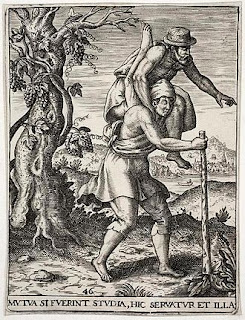 Ein kol chadash tachat ha-shamesh – “there is nothing new under the sun.”  That was going to be my start to this sermon on the importance of voting, as well as the limits to that importance.  And further, to ask why our political affiliations and even the political goals we would see achieved should define who we are so much, shape our identities to such a degree, that they can lead us to the bitterness and division we have now in our country.  Are there no other things more important that could connect us to others?

I would still like to give some of that sermon, but as I worked on it, it didn’t end up where I thought it would – proof, if you were looking for it, that it’s not always, “come up with an idea, sprinkle in Torah verses that justify your position, make it sounds like what you thought was Jewish all along.” In fact, sometimes a sermon really has something to say.  And I pray this is one of those times.

In order to confront one’s anger or fears or anxiety (in the general sense of anxiety), a therapist might ask you to imagine what the worst that could happen would be if your fear, anger, anxiety were to be realized?  You get fired.  You miss the flight.  In these and even more extreme cases, the results are that you would still be alive, and you would need to, have to, be forced to, find a way to go forward.  And, like countless others who’ve experienced the same and worse, forward you would go.

We modern Americans suffer from three plagues (separate from Coronavirus) that are, nevertheless, just as deadly.   One, we have no sense of history.  Not just who the twelfth president was (Zachary Taylor), but that any idea, any norm, any issue, might not have been, and thus might not really be, as important as we believe it to be based on our own narrow understanding of reality.

Secondly, we today suffer from a total lack of perspective.  What do I mean by this?  When you’re taught that the next most important thing in terms your identity after your political affiliation is which sports team you like, and that there is nothing more important than political party affiliation – you are sorely lacking in having a well-rounded character.

Even so, we consume American culture, where politics and political affiliation dominate all that we hear and see, and so they are become the most important.  So much so that you may really start to question why you spend so much time on your model trains if everyone else on the block has election signs galore sprouting from their lawns but you  - why aren’t you “on board” with everyone else?  (Sorry.)

Finally, and I repeat this all the time because I find it to be so true: Americans are blessed and cursed with the idea that everything will work out okay in the end.  The good guy will win, they will all live happily ever after.  And because deep down we all know that really isn’t true, anything that would make us rip off the Band-Aid hiding reality we recoil at and fight against.

You might challenge me and say – but the makeup of the Supreme Court, or the ability to have private insurance, or knowing the point at which a human life begins – these are history-making issues of life and death!  How can you not think so?!

Because they really aren’t.  They really aren’t.  Sure, if you take the perspective of the four years until we can pick a new president, sure they seem colossal.  And if you look at the next twenty years of your life, yes, still pretty big.  But all of American history?  Compared to all the suffering in the world today?  The span of human civilization?  Why aren’t those the terms by which we measure?  What would be wrong with that if we did?

You know, Supreme Court justices all get replaced eventually.  They die, they retire.  And looking at actuarial tables, pretty much all of them are closer to the retire or die side of things than not.

But why stop there?  Whether we “repeal Obamacare” or move to a single payer system, I feel emboldened to say that it will be true either way that almost all Americans will still live longer and healthier lives than billions of other people on the planet today.  Not to mention better lives than just about every other member of our species who has ever lived before now.

Finally, even if all the political issues break your way – there will still be people who will die, who will fail, who will lose their jobs or their money or their freedom because we humans, try as we might, cannot escape the fact that even the best things we design and make are always in human hands and therefore we are the design flaw in everything we attempt to achieve.

Now I had had it in mind to pretty much wrap up at this point.  A neatly packaged, contrarian, sermon, about taking it a little easier and with some more perspective on things.  We’re all stumbling around in the same dark room, no need to be kicking your legs all over, too.

But then there’s Abraham.  We’ve already met Abraham, Abram as he is at this point in the narrative, but out of respect for the name God gives him, we should really refer to him by the preferred name.  He, his father Terach, his brothers Nahor and Haran, their wives and Haran’s son, Lot, are all introduced at the end of last week’s reading.  We even learn that Haran died during his father’s lifetime and that Sarah (Sarai) is barren.

Abraham – who has watched his brother die.  Seen his nephew, Lot, become an orphan.  Seen his father Terach suffer the loss a son which the Torah’s narrative flow, the ages given notwithstanding, suggests leads to Terach’s own death.  And though he and his wife desire children they are childless.  That sounds like a miserable life.

And so, it may come as a surprise, at least to one reading this afresh, that the barren grieving couple are given the mission they receive as we begin today.  To bring God’s presence into the world through their own righteous deeds and those of all the descendants they will have.  They are told,  “go forth… to the land that I will show you… to your offspring I will give this land.” Lech lecha… el ha’aretz asher areka…l’zaracha eten et ha’aretz ha-zot.

Avivah Zornberg quotes from Henri Bergson in describing all that “is not” in the lives of Abraham and Sarah when we start the parshah, “in nature… there are no negative conditions; only in the realm of consciousness, of desire and expectation… every human action has its starting-point in a dissatisfaction, and thereby in a feeling of absence.”

She goes on to say that their suffering might in fact have conditioned Abraham and Sarah, to be just the right couple to be successful in going forward when that seems the last thing they should be able to do.  Their experiences making them the saviors of others.

I can’t argue with Zornberg.  She’s reading the truth here about Abraham and Sarah.  And us.  And, if we were to look to Heschel, about God, also.  God, out of a yearning, a need, not to be alone, made all of this, and all of us.  And as big a mess as we are, keeps us around and doesn’t give up on us.  Abraham and Sarah bring God’s attitude towards the world to realization.  Caring, helping, even when it seems futile, is what we are here to do.

Now I find myself saying, you know what – you do need to go out there, lech! Lechu! Go!  Vote, protest, advocate, volunteer.  You might be just the person whose own suffering makes you exactly the right person to alleviate that of others.

Yet, the things I said at the start, they are also true.  It can’t be good to let our political identities and causes override the rest of who we are for ill.

And so, we must look back to what Abraham and Sarah are told.  They are grieving, feeling loss, pain, fear, anger, resentment.  All the things we share with them.  And then God tells them to go.  Just as we must “go” in our efforts to make the world better for ourselves and others around us – by voting and being kind, and by so much more.

For additionally, they are told the key and final part, vehyeh brachah, “and you shall be a blessing.”  Because all our going is coming from lacking, needing – and because everyone else’s is too.  We must go out and do in a way that is a blessing.  The world is populated only with broken and hurting people who hope something can happen to make them suffer a little less.   Please God let it be, that if we are the ones blessed to have the antidote to that suffering that we, in administering it, do so in a way that shares our blessings, too.

Shabbat Shalom.  Go forth.  And vote.

Posted by Rabbi Aaron Benson at 4:54 PM No comments: