Bechukotai - What a Few Can Do


Parshat Bechukotai: “What a Few Can Do” – Whenever we get to this parshah I always enjoy the bad math employed to show just how successful the Jews will be in defeating their enemies, should they heed the will of God:
וְרָדְפוּ֙ מִכֶּ֤ם חֲמִשָּׁה֙ מֵאָ֔ה וּמֵאָ֥ה מִכֶּ֖ם רְבָבָ֣ה יִרְדֹּ֑פוּ וְנָפְל֧וּ אֹיְבֵיכֶ֛ם לִפְנֵיכֶ֖ם לֶחָֽרֶב׃
“And five of you shall chase one hundred, and one hundred of you shall put ten thousand to flight: and your enemies shall fall before you by the sword.”

The message of the verse is that just as the ability of the 100 grows exponentially to combat the 10,000 – up from the 5 against 100 – so too does our community, the more united it is, gain in power and ability to overcome those who do not, for whatever reason it may be, stand with us.

Sadly, this is a message all the more necessary today in the face of rising antisemitism that cannot be denied and in a world all the more divided and contemptuous.

The parshah is encouraging us, that even a few can do a lot – can influence dozens each, and that if enough of us are working together, we can reach even more.

The bad math I think is there precisely to remind us just how powerful we can be.  Let us be the ones who stand up to hate, disagree without malice, and multiply the impact we make for good in the world around us!


Posted by Rabbi Aaron Benson at 6:52 PM No comments:

Kedoshim - Holiness All Around 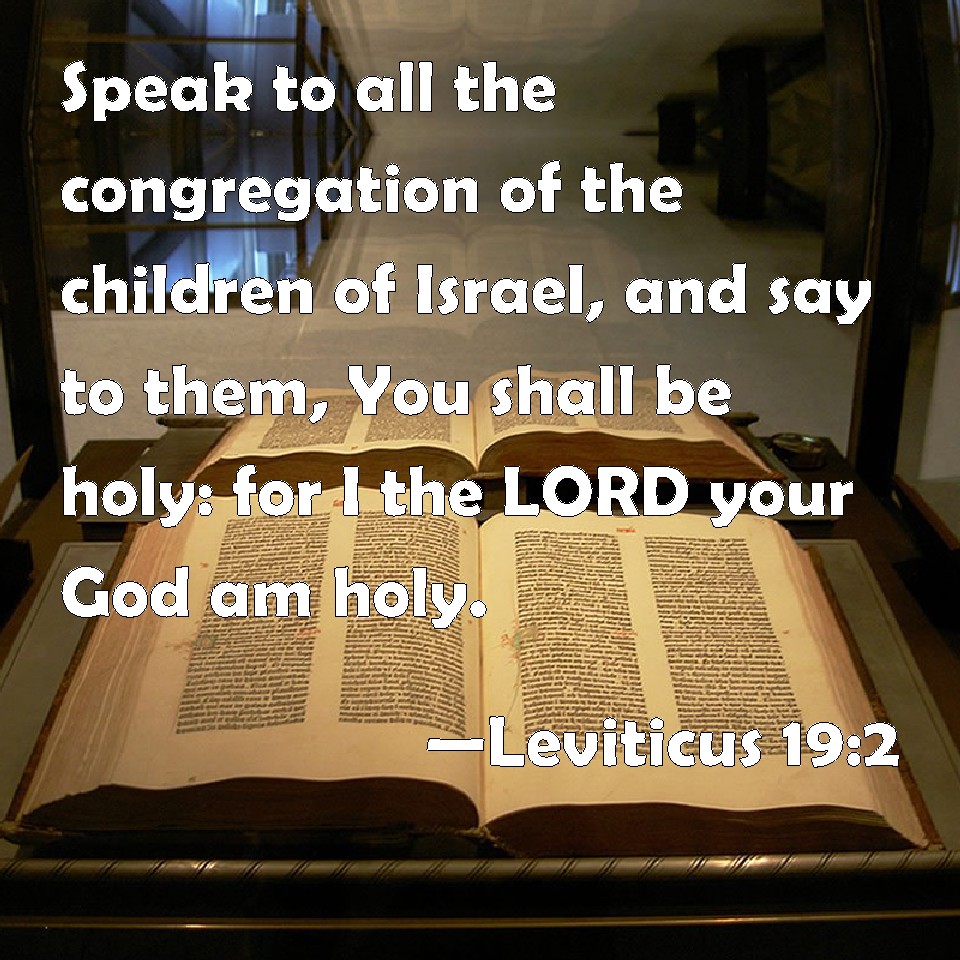 Parshat Kedoshim – “The Meaning of Holiness:”  People don’t like to hear it much less think this way, but I tend to believe it is true that we should expect life not to be particularly easy or happy or fulfilling, at least such things shouldn’t be taken as the norm.  If we don’t expect ease and comfort, we prepare ourselves to really enjoy and be grateful for all the good stuff that does happen when nothing says we should have any at all.

In this week’s portion in which we are told, “be holy for the Lord your God is holy” a similar question confronts us in trying to understand what this says to us.  Here we are, human beings, living our lives, doing our thing, what does it mean to have to be holy?  Holiness gets associated with synagogues and prayer books and lots of prayers and things that aren’t “normal life.”
Perhaps, we would be better served as thinking of ourselves and the world as all being holy, that holiness is in fact the default setting, and that the interruptions are all the mundane and seemingly “non-holy” things we fill our day with, and not the other way around.

What would this vantage point show us?  Much like with our opening example which would teach us to appreciate the good when it comes because we may end up having a lot of bad, the “everything is holy” view would allow us to see the real human connections, the real transcendent moments, the real presence of the divine, in all moments and everything we do.  Everything would become more beautiful, more meaningful, more special, more holy, in other words.  Rather than trying to squeeze enough holiness to sustain us from the occasional or even frequent trip to synagogue, we could instead find it everywhere and at all times, nourishing and fortifying our souls with that which makes life alive.

“Be holy” we are told – perhaps we already are!

Posted by Rabbi Aaron Benson at 12:14 PM No comments:


Acharei Mot – “After Death, Congregants & Rabbis” - The parshah’s name this week couldn’t be more apt “after death.”  It refers to the deaths of Aaron’s sons the priest Nadav and Avihu, and it refers in our time to Yom HaShoah which was this week, but also to the murder of Lori Gilbert-Kaye, HY’D, who died last Shabbat at the end of Passover when her synagogue, the Chabad House of Poway, CA was attacked by shooter.  She died saving the life of her rabbi, Rabbi Yisroel Goldstein.   That shook me.
The idea of a congregant dying for her rabbi has filled my head since hearing of it.  To me, it is not the way it should be.  God forbid the situation should ever arise, but if it were to, I’ve felt it must be the other way around.  You’re here to help and guide your people and to care for them.
I’m moved to share a story with you that has shaped my thinking on this matter.  When I was a young and new rabbi, I had a colleague who sat on the Rabbinical Assembly Bet Din in Los Angeles named Rabbi Henry Kraus.  As I taught Introduction to Judaism, I took many candidates for conversion before the Bet Din and got to know Rabbi Kraus because of it.  He was in his nineties, very sharp, and he himself had been a young, single rabbi in his late twenties just like I was then, in Hungary in the 1940s.  I got a kick of hearing about the large parsonage house the community insisted he live in, including a housekeeper, and how negotiations for his contract sounded just like the things we had to deal with, too.
Rabbi Kraus also told of what happened to his congregation when the Nazis took control of Hungary late in World War II.  Hungary had been an ally to Nazi Germany but had treated its Jews differently than had been the case elsewhere in Europe.  When the Germans took over the country as it sought to exit the war independent of the other Axis Powers, all the Jews were quickly rounded up to be sent to their deaths.
The congregation had the ability to save their beloved rabbi and help him escape, but Rabbi Kraus decided he would stay with them.  Sure enough, he was loaded onto a truck to be taken away.  As it happened, his parents, who were still living, had yet to be taken and he knew they were likely to make their escape.  Thinking quickly, he wrote on a postcard her had with them to their address with a brief note, “went with my congregation” – pinned a few pengo bills to it and tossed it over the truck to a passing Hungarian girl hoping she’d deliver it.  Then the went to Auschwitz.
He showed me the postcard, which had been duly delivered to his parents who had been able to flee and who gave it back to him when he returned after the war.  You could even see the two holes on it where the pin had been.  That to me, was what a rabbi’s dedication to his congregation should look like.
But Lori Gilbert-Kaye’s story doesn’t contradict this lesson, it adds a beautiful new realization to it.  That the rabbi need not be only the protecting parent.  Perhaps even that’s not the best thing, and that it spoke to me as much as it did because of my age at the time, though the story still moves me.  Again, God forbid it ever happen, but we, rabbis and congregants, are all in this together – equally committed to each other and to Jewish tradition and its continuing legacy; equally full of a desire to be brave and loving and courageous and do the right thing.
Let it not be a tragedy then that proves it for us.  Let us instead find ways of spreading and strengthening Judaism in our community working hand in hand as the way in which we honor these stories, these deaths, and the many brave souls among our people.
Shabbat Shalom

Posted by Rabbi Aaron Benson at 11:09 AM No comments: