We all know how Tevye famously says, “you’re right” and “you’re right” and “you’re also right” to three people in the same argument.  The line is played for laughs but being able to “see” more than one thing is a value in Judaism and in our parshah.  We must be able to reckon with competing virtues all the time, and more of a struggle, we must work to understand when people, even ourselves, turn out to not to be just one-sided, but rather complex individuals.  To “see” the world other than complicated is to run the risk of seeing it as wicked

In the parshah we read about the evil Prophet Balaam, who has been hired to curse the Jewish people, “He took up his parable and said, ‘Balaam the son of Beor, the man whose eye is open, has said…” נְאֻם בִּלְעָם בְּנוֹ בְעֹר, וּנְאֻם הַגֶּבֶר שְׁתֻם הָעָיִן

Rabbis understand this to mean Balaam had one eye – literally and figuratively.

What is the significance of this?  It explains what Balaam ends up doing – he blesses the Jews instead of cursing them.  He is able to rightly see that they are deserving of God’s favor.

At the same time, as we later read in the Torah, and as rabbinic tradition makes clear, Balaam turned to other means to defeat the Jews, and was killed for it.  He was unable to see his own faults, that he was not a good man.

In Judaism – very important to see with two eyes.  One to recognize God and to know what God wants, but even more important, the other, to see how well you are fitting into what God wants.  It’s easy to point out the flaws in everyone else, and how they fall short of God’s wishes, but we must be able to cast an eye on ourselves.

Being able to see how well we measure up is more than just “half” of what we need to see.  We are truly “blinded” if we are unable to perceive our own faults and shortcomings.  Being able to see these, and then also being able to see what we should aspire to achieve and be like allows us to have “complete vision” and “clear eyes.”

Posted by Rabbi Aaron Benson at 7:14 AM No comments:

Vigil for Prayer and Unity, this Sunday 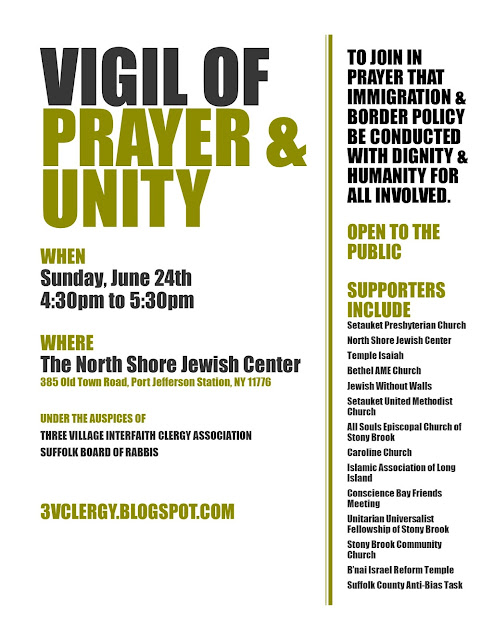 Posted by Rabbi Aaron Benson at 7:21 PM No comments: